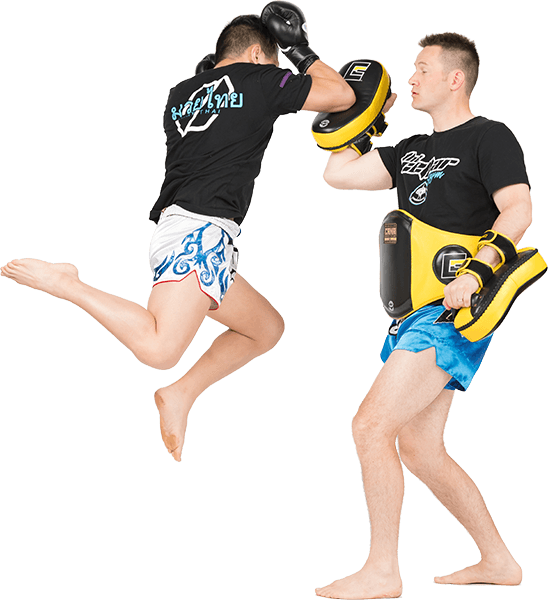 Muay Thai, translated to English as “Thai Boxing”, is the National sport of Thailand. It is also referred to as the “Art of Eight Limbs” because, unlike Western Boxing which only uses two fists, Muay Thai involves using one’s punches, kicks, elbows, and knees to create eight points of contact. Muay thai also differs from the other striking arts of kickboxing and boxing by utilizing many different clinching techniques to create openings for all the eight weapons.

Students of Muay Thai at The Cellar Gym will move up through the ranks developed by the World Thai Boxing Association and Ajarn Surachai “Chai” Sirisute. Once a member has reached an appropriate level, they will be invited to join advanced classes which are ideal for students who have an interest in competing Muay Thai or training MMA. Not interested in competing? It is also a great class to take if you have an interest in learning self-defense, coordination, or to shake up your fitness routine!

In class, students will learn proper striking technique as well as blocking, movement and timing all while getting a great work out!

What Can You Expect From Our Classes?

Get In Great Shape

I’ve never met more dedicated or passionate people in my life. This place has changed the way I live . Never a boring class, never an uncaring trainer..a never say never kind of place. Everyone should try a class…you’ll be hooked!

GETTING STARTED IS EASY!

Try 3 Classes and Get a FREE Pair of Boxing Gloves!